To me, the most joyous thing about fatherhood, is that return home. Long day at work, a slog of a commute, worn, itching for home, chores on your mind. And then you walk in, your little one is oblivious of your mind state, and rightly so, he smiles, the biggest of smiles you’ve seen all day, the most sincere. He is happy to see you. He is happy. In that moment, you forget, everything. Your son is happy, what else can matter. This for me trumps it all.

I was recently opportune to be at home on a weekday with him. Took him down the park. It’s a fairly simple thing to do. Right? Yet, a lot goes into doing this. His food. What will he play with? A ball? His toys? Would he rather just walk? Water? Nappies? Wipes? Pram or no pram? It’s no quick stroll. Things have to be planned for when walking around parenting. I’m up and go, so quite a bit of adjusting needed on my part. I can’t just up, quick shower and leave the apartment … those days are a mirage, a thing of the past. A lot of patience this calls for. So yes, I felt proud through my first few successful walks down the park with my son. It ain’t the Olympics, I know … but it’s quite something.

Indeed there is a sense of pride that comes with becoming a father. This I imagine never goes away, and yet it is always threatened. What destiny lies ahead for my child, I’d often wonder. But who is to know. Why worry. Raise him as well as you can. His path will be his path. That is my rational mind speaking of course. And as with most things, your rational mind trumps the flutter of fear which now and again tugs at the heart of any parent.

Are you babysitting today, a lady with her 8 month old down at the park asked me. My son had taken to jaunting off at this point. I smiled. Babysitting is what you do with other people’s children, I said. I’m just out here chilling with my son, I thought. You know. As you do. I had long made it a thing for me … where I’m able to spend the day with my son, without overthinking it, or counting down to the time his mother returns, to relieve me of his care. You see, for me that’s a poor state of affairs. So no, I wasn’t babysitting … I was spending time with my son, actually better, I’m here and my son is also here. Now and again, he needs his water, a nappy change, some food, a biscuit, a hug, cuddle, so what. I can do all these and still do other stuff, sneak in a quick writing session for one thing as he distracts himself with a toy or two. Not ideal, but these little spurts of writing do add up. I’d long trained my mind not to need tranquillity for my writing anyway. So hey.

Anyway, the lady in the park, says, hmmn, you should see Victor (her partner), he is afraid to stay with Jacob (son, not real name) for more than two hours. Now, this may come as a surprise for the uninitiated, but I have reason to believe that men, at least in the early stages of becoming a first time dad, are terrified of being left alone to care for their tiny tots. Oh yes, I graduated into this walking my son to the park thing with confidence, for surely it did not come as second nature. It is an acquired skill for sure –knowing that whatever happens out in that great outdoors with your little one, it is for you to sort out. A massive tantrum. A poop. A crying fit. Missing mama. Sudden temperature. A fall. Keeping an eye on him. Attempting to wander off. Attempting to play with dog B because dog A was friendly, though dog B is all Chihuahua and snarls. Attempting to hit another child. Attempting to take another child’s toy. Letting another child take his toy and then crying over it – what is the etiquette for the watching adults: do they leave it for the tiny tots to sort out? I’m yet to be fully initiated. So yes, it’s merely a walk in the park, but sharpen the senses a tad, it does.

Author with a zest for African Literature. Completed a Masters degree in Petroleum Engineering at Heriot Watt University. Recently became a father. Spend spare time writing, writing, writing. Debut novel, The Teacher The Seamstress and The Pianist is out and available on Amazon. View all posts by Ogenna Ojukwu

Buy The Teacher The Seamstress & The Pianist 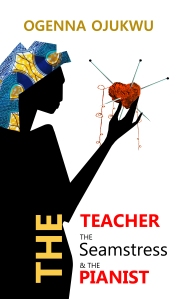